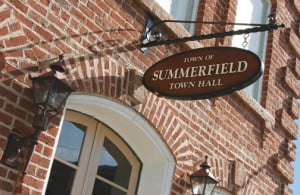 History:  Incorporated as a Town in 1996, the area now known as Summerfield was settled in the 1700s by English colonists.  It once was called Bruce’s Cross Roads, after Charles Bruce, who built a large plantation near two of the area’s busy stagecoach routes.

Government:  Summerfield has a limited-services government run by a six-member council.

Culture and City Life:  Convenient to Kernersville, Greensboro, Oak Ridge, Winston-Salem, etc., Summerfield is often thought of as a suburb of Greensboro.  Residents of Summerfield participate actively in the community and cultural life of Greensboro and other surrounding towns.

Public Schools in Summerfield, NC:
The Guilford County Schools that most Summerfield children attend are well-regarded and top-scoring schools:

You can search for homes for sale near any of these schools here.

If you are hoping to enroll your children in any of the high-performing Summerfield schools such as Summerfield Elementary, Northern Middle, Northern High, or the new Summerfield Charter Academy, look for Summerfield real estate.  Summerfield residents enjoy the best of Greensboro's city life while being able to return home to a little more space within just 20 minutes.

Summerfield real estate market information can be found in our Market Insider. You can search all of the lovely Summerfield homes for sale here.