The Greensboro Science Center has been a fixture in the area since it opened in the 1950s - today, it is one of the most-visited destinations in the state of NC. After a $20 million bond was approved in 2009, the center began construction on a variety of enhancements and improvements that are delighting visitors young and old, local and from out of state. 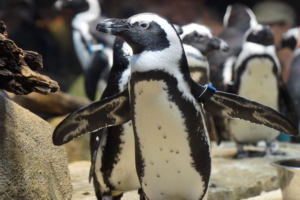 Now officially named after former VF Corp. CEO Eric Wiseman and his wife, Susan (who provided a major donation that enabled a 5,000-square-foot addition that just opened) the 23,000-square-foot Greensboro Science Center’s Wiseman Aquarium is a big draw for school groups, families, and visitors to the Piedmont Triad.

Adding to the aquarium’s existing 18,000 square feet of exibits, which include penguins, fishing cats, sharks, otters, a touch tank, and much more, the new addition features 17 new exhibits of aquatic life, invertebrates, and fish, plus three new galleries:

The aquarium opened to great fanfare in 2013, and it doubled attendance at the Greensboro Science Center.

Now, the museum will focus on expanding its zoo, planning to double its size by 2020. For an overview of the master plan, check out the News and Record's story here. An all-new dinosaur gallery will open later this year, allowing visitors to walk on the Prehistoric Path, which has been designed to look at life millions of years ago, exploring animal adaptations and strategies for survival. Other components of the massive addition will include (among many other things):

The Science Center will also introduce a new greenhouse complex, which will be used for education, plus provide food and plants for animals and habitats. Visitors will be able to learn about sustainable practices and ways to protect our environment to ensure survival of many species. Plans also include sculptural willow tree structures that can be played on and climbed upon.

The Greensboro Science Center has grown so much over the last 15-20 years, and it’s become a fascinating and fun destination for sunny days (outdoor animal habitats, SkyWild aerial adventure park, petting zoo) and rainy ones, as well (Aquarium, weather exhibits, Omnisphere shows, and much more). With awesome Junior Curator, LEGO engineering, summer camp, and other programs, this is the place to be.

If you haven’t visited it lately, we highly recommend a trip…and soon!

At GreatNest, we serve buyers and sellers across Greensboro, High Point, Winston-Salem, Summerfield, Oak Ridge, Jamestown, and the rest of the Piedmont Triad. Our experienced real estate professionals help home buyers and sellers save money by charging a low set fee instead of a percentage commission. Please get in touch by calling (336) 790-5210 or by emailing Steve Vincent.  Visit our website at greatnest.com.