Why Is Greensboro Called "The Gate City"?

Not too long ago, my daughter Julia asked me this question:  Why do they call Greensboro "The Gate City”?

As long as I’ve lived here, I had no idea, so we Googled the answer.  I was guessing that the nickname had something to do with noted area artist Jim Gallucci’s work, which often takes the form of gates, but I was wrong.  Greensboro is the Gate City in a more metaphorical sense – the nickname arose in 1891, when the city saw the arrival and departure of 60 trains per day.

The area’s railroad system had been heavily promoted by former Governor John Motley Morehead (whose home, Blandwood, was in Greensboro), and the two parts of the railroad, from Charlotte and Goldsboro, were connected on January 29, 1856, between Greensboro and Jamestown.  The railroad served as an important supply line for the Confederate Army during the Civil War. After the war, the railroad continued to develop until by 1891, when it received its Gate City moniker, there were lines running east to west, north to south, and all directions between.  At that time, there were 16 major manufacturing plants in the city, and they all needed a reliable way to receive raw materials and ship out their products.

Throughout its history, the railway continued to be an integral part of industry and commerce in Greensboro, ensuring Greensboro’s place as “the Gate City” for more than 100 years. 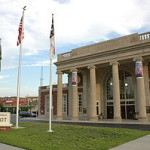 Today, you can take an Amtrak train from Greensboro to just about any city in NC or along the East Coast.  If you do, you’ll board the train via The Greensboro Southern Railway Depot, which was built in 1899—part of the original building remains as part of Greensboro's downtown multi-modal transportation hub, which locals know as “The Depot”.

Now you know why Greensboro is called the Gate City!